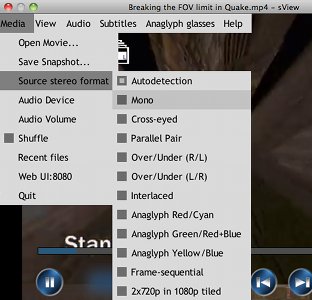 Stereoscopic pair consist of two slightly different images of the same size captured from for left and right eyes (e.g. from two camera positions). This pair can be stored in various ways in the file:

Anamorphic stereo pair with Side-by-side and Over/Under layout is a special format introduced for compatibility with build-in TV players and existing hardware players without HDMI 1.4a+ support. Video stored in this format has broken pixel proportions - it identifies itself as normal 16:9 video with 1080p HD resolution (1920x1080). Both are important - old hardware players have been unable to decode videos of greater side, and 16:9 proportions allow transferring video image through HDMI without extra scaling or cropping which should be normally applied. So in general this format has been created as a temporary hack entrenched for much longer time than expected…

Normally files should contain appropriate stereoscopic metadata to be properly displayed by players without user involvement. Unfortunately, many files still created without this information requiring manual configuration by user.

If your file has been opened wrong you should try to change “source stereo format”. In most cases this is just layout which defines how left and right views are stored in single frame. At first step you should select “Mono” format to see the original frame.